The creative power of formal analogies in physics: the case of Albert Einstein 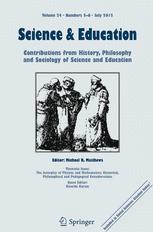 In order to show how formal analogies between different physical systems play an important conceptual work in physics, this paper analyzes the evolution of Einstein’s thoughts on the structure of radiation from the point of view of the formal analogies he used as ‘‘lenses’’ to ‘‘see’’ through the ‘‘black box’’ of Planck’s blackbody radiation law. A comparison is also made with his 1925 paper on the quantum gas where he used the same formal methods. Changes of formal points of view are most of the time taken for granted or passed over in silence in studies on the mathematization of physics as if they had no special significance. Revisiting Einstein’s classic papers on the nature of light and matter from the angle of the various theoretical tools he used, namely entropy and energy fluctuation calculations, helps explain why he was in a unique position to make visible the particle structure of radiation and the dual (particle and wave) nature of light and matter. Finally, this case study calls attention to the more general question of the surprising creative power of formal analogies and their frequent use in theoretical physics. This aspect of intellectual creation can be useful in the teaching of physics.