Speculative Philosophy at the Berlin Academy 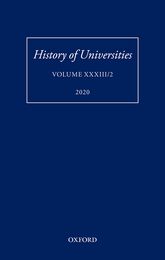 This contribution focuses on the way in which the relationship between the fields of philosophy and science was the object of intense debate at the Berlin Academy. The contribution analyses some key papers in which members of the academy try to determine what they call the ‘academic spirit’. An important source is Maupertuis’s lecture, in which he explains his views, as president, about the division of classes and the advantages of carrying out research in an academy. But there are other important contributions; particularly that of Formey who, as secretary, wrote several papers on these questions, but also of Dieudonné Thiebault, Jakob Wegelin, and Christian Garve. These discussions took place at distinct periods and express different ways of conceiving of the production of academic scholarship. Most importantly, their representation of speculative philosophy changed, to the extent that some believed that this field should no longer be discussed in the context of the academy. Christian Garve maintains this view, which expresses a major change in the history of the institution. This position is also accompanied by a gradual disappearance of speculative reflections.