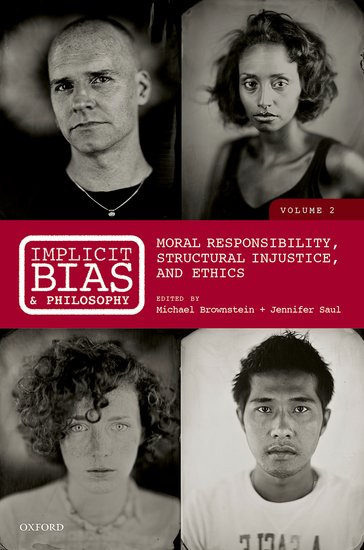 There is abundant evidence that most people, often in spite of their conscious beliefs, values and attitudes, have implicit biases. ‘Implicit bias’ is a term of art referring to evaluations of social groups that are largely outside conscious awareness or control. These evaluations are typically thought to involve associations between social groups and concepts or roles like ‘violent,’ ‘lazy,’ ‘nurturing,’ ‘assertive,’ ‘scientist,’ and so on. Such associations result at least in part from common stereotypes found in contemporary liberal societies about members of these groups.

Implicit Bias and Philosophy brings the work of leading philosophers and psychologists together to explore core areas of psychological research on implicit (or unconscious) bias, as well as the ramifications of implicit bias for core areas of philosophy. Volume 2: Moral Responsibility, Structural Injustice, and Ethics is comprised of three sections. ‘Moral Responsibility for Implicit Bias’ contains chapters examining the relationship of implicit biases to concepts that are central to moral responsibility, including control, awareness, reasons-responsiveness, and alienation. The chapters in the second section–‘Structural Injustice’–explore the connections between the implicit biases held by individuals and the structural injustices of the societies in which they are situated. And finally, the third section–‘The Ethics of Implicit Bias: Theory and Practice’–contains chapters examining strategies for implicit attitude change, the ramifications of research on implicit bias for philosophers working in ethics, and suggestions for combatting implicit biases in the fields of philosophy and law.