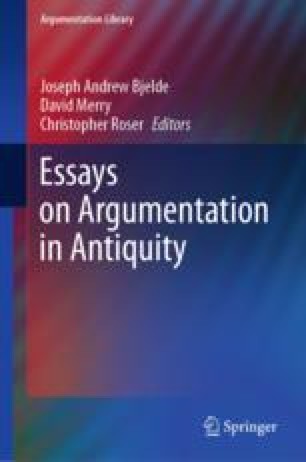 It is first argued that dialectic was a form of regimented debate, which grew out of public debates in Ancient Greece. A set of rules for dialectical bouts is then given and their meaning explained. The transition from oral to written arguments is briefly examined, leading to the formulation of a delimitation problem in Plato’s dialogues, as he inserted dialectical arguments within ordinary dialogue contexts, turning them into discussions where one of the participants reasons hypothetically to make the other realize that they are not entitled to their view. Doing so, Plato adjusted dialectic to a variety of dialogue purposes and in order to explore this variety, a study of the early tradition of classifying Plato’s dialogues in terms of their ‘character’ is suggested, the results of which are then compared with types of dialogues in contemporary Argumentation Theory.