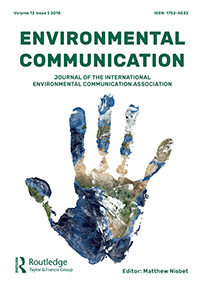 This article examines the conditions under which environmental beat journalists can gain credibility as expert informants. It shows that media storms foster a particular dynamic that can add to this credibility. Comparing a media storm over shale gas development in Quebec with regular coverage of the same issue in British Columbia, this article shows that the coverage space given to environmental beat journalists during a media storm can render their alliance with protest groups mutually beneficial. Beat journalists can benefit from the willingness of these groups to participate in their stories, while the groups benefit from increased visibility. Beat journalists also benefit by being perceived as expert informants in policy networks, a role that they use to encourage policy-makers to take the concerns of protest groups seriously. This dynamic also increases the negativity of the news coverage. The article makes a contribution to knowledge on the role of environmental journalists in policy-making processes.