Do central banks serve the people? 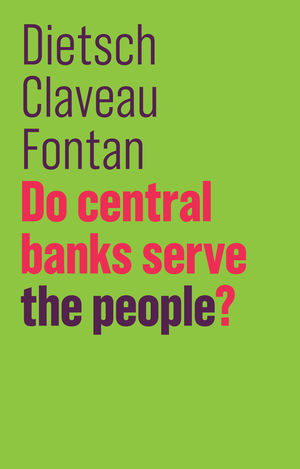 In the wake of the 2007 financial crisis, they injected trillions of dollars of liquidity – through a process known as quantitative easing – first to prevent financial meltdown and later to stimulate the economy. The untold story behind these measures, and behind the changing roles of central banks generally, is that they have come at a considerable cost.

Central banks argue we had no choice. This book offers a powerfully original examination of why this claim is false. Using examples from Europe and the US, the authors present and analyse three specific concerns about the way central banks in developed economies operate today. Firstly, they show how unconventional monetary policies have created significant unintended negative consequences in terms of inequalities in income and wealth. They go on to argue that central banks may have become independent of governments, but have instead become worryingly dependent on financial markets. They then proceed to analyse how central bankers, despite being the undisputed experts on monetary policy, can still err and suffer from multiple forms of bias.

This book is a sobering and urgent wake-up call for policy-makers and anyone interested in how our monetary and financial system really works.