Bacterial Transformation and the Origins of Epidemics in the Interwar Period: The Epidemiological Significance of Fred Griffith’s ‘‘Transforming Experiment’‘

Méthot, P.-O. (2016). Bacterial Transformation and the Origins of Epidemics in the Interwar Period: The Epidemiological Significance of Fred Griffith’s ''Transforming Experiment''. Journal of the History of Biology, 49(2), 311-358. 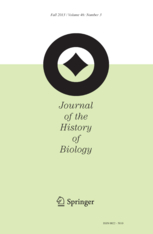 Frederick Griffith (1879–1941) was an English bacteriologist at the Pathological Laboratory of the Ministry of Health in London who believed that progress in the epidemiology and control of infectious diseases would come only with more precise knowledge of the identity of the causative microorganisms. Over the years, Griffith developed and expanded a serological technique for identifying pathogenic microorganisms, which allowed the tracing of the sources of infectious disease outbreaks: slide agglutination. Yet Griffith is not remembered for his contributions to the biology and epidemiology of infectious diseases so much as for discovering the phenomenon known as ‘transformation’. Griffith’s discovery, for many, was a pure case of serendipity whose biological relevance had also largely escaped him. In this paper, I argue that the key to understanding the significance of bacterial transformation – and the scientific legacy of Fred Griffith – rests not only on it initiating a cascade of events leading to molecular genetics but also on its implications for epidemiology based on the biology of host–parasite interactions. Looking at Griffith’s entire career, instead of focusing only on the transformation study, we can better appreciate the place of the latter within Griffith’s overall contributions. Presented in this way, Griffith’s experiment on bacterial transformation also ceases to appear as an anomaly, which in turn leads us to rethink some of the most prevalent historical conceptions about his work.