A Science Show Debate: How the Stasi Staged Revisionism 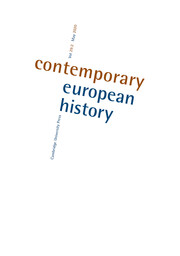 In the early years of the East German Democratic Republic, in particular after Khrushchev’s speech breaking with Stalinism, there was hope among leading economists that new reforms would usher in a truly democratic socialist economy. The newly-founded Institute for Economics at the Academy of Sciences, under the leadership of Friedrich Behrens, put forward ideas that the party soon labelled ‘revisionist’. This article reconstructs the dismantling of this group of reformist economists using detailed documents of the secret police, the Stasi. I demonstrate how the Stasi staged a show debate analogous to the known show trials under Stalin. In spite of its forced character the show debate allowed the party to both resist reform and claim their policies to be a scientific undertaking.