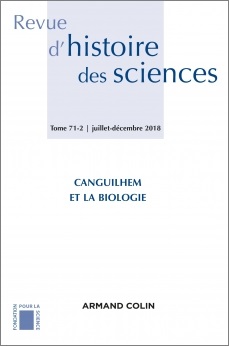 This article explores the place of evolutionary theory in Canguilhem’s Essay on some problems concerning the normal and the pathological. After emphasizing the importance of biological thought in his work and after considering his early « evolutionary studies », this article focuses on « the problem of evolution » in a course Canguilhem taught in the Faculty of Arts at the University of Strasbourg in 1942-43. I argue that he was less concerned with the question of the heredity of acquired traits than with demonstrating the role of mutation in the origin of species. Indeed, if a mutation is not de facto lethal or sub-pathological, a claim made by most « fixist » (creationist) biologists, but capable of giving birth to new forms of life, it is proof that the « anomaly » should not to be considered as pathological from the outset. Canguilhem believes, however, that mutationism alone fails to account for the « adaptive orientation » of living beings in history, which leads to his resorting to the Darwinian principle of natural selection to explain adaptation. But, often portrayed as a conservative process of the « average type » in a population, natural selection also seems inadequate to explain new phenomena in biology. In order to get around this problem, Canguilhem borrows from zoologist Georges Teissier the idea that selection can be « creative » when external conditions change and, building on the latter’s work, argues that a fundamental characteristic of organisms is that they are never indifferent to their environments. In short, Canguilhem has found in evolutionary theory in general the foundation of « vital normativity », that is, the starting point of his biological philosophy.